A walk in the Aegean Sea- Spectacular Mykonos


Introducing our guest blogger for this week, the beautiful, the delectable, the intelligent, the adventurous Olatilewa Babalogbon! Olatilewa is one of those women who is totally irresistible, not just because of how she looks (though the picture above says it all) but mainly because of who she is, a mother, an entrepreneur par excellence, a full-time employee, a savvy business woman and a lover of God and His creation. Time spent with Olatilewa leaves me feeling refreshed, rejuvenated and encouraged. Olatilewa loves traveling and so we are kindred spirits in that regard! Recently, she was going to visit Greece (my other country), and she was going to visit Santorini and Mykonos which I hadn’t been to, so I begged, cajoled and blackmailed till she promised to share her journey with us! And so, I have the delight of sharing here, Ola’s visit to the beautiful island of Mykonos.  Let’s live vicariously through her, shall we? Enjoy!

I admit, I have wanderlust. Just the thought of visiting a place I have never been before gets my heart racing! So you can imagine my excitement when our flight touched down at 11.20am on 22nd September, 2014 at the small airport on a hill in Mykonos, one of the Greek Islands dotted around the Aegean Sea. Greece has between 166 to 227 inhabited islands and Mykonos is one of the islands that make up the Cyclades complex. The flight from  Athens to Mykonos is less than 30 minutes and all through the flight, I could barely contain myself. Thank God for the seat belt restraining me!
I have always wanted to visit Greece. I had been contemplating what new place to visit this past summer when I woke up on the 22nd of August, 2014 to the notification of a new post on my friend’s blog (Hajel’s Musings) which screamed the heading “Greece! Greece! Greece!” Boy, did she get my attention! I love reading Hajara’s blog posts. I think she’s an amazing writer. She has that inane ability to keep you enraptured paragraph after paragraph. More importantly we share a love of travelling. After reading that blog, Greece ‘had me at hello’! Lol. By the way Haj, you have to write a book. I am sending you my bill for PR/advertising services ahead of the book launch. *wink wink*
My awesome partner in crime, love of my life aka husband, and I had spent 3 days in Athens in the beautiful Royal Olympic hotel overlooking the Temple of Zeus. There is so much to see and do in Greece…but because of our short stay in Athens we could only visit a few of the sites. We got on the yellow hop on hop off tour bus and visited the new Acropolis museum, Panathenaic stadium etc. Everywhere in Athens, there is graffiti on the walls. Amazingly it didn’t look like it defaced the walls, more like it gave the city character.
I can’t help it, but I have to write about one incident. Though perhaps inconsequential, none the less it is one of my funniest memories of Greece. In Athens we had been given a map by the wonderful concierge in our hotel and on it the yellow tour bus was recommended, so we went out looking for the yellow bus but unknown to us, there was also a red bus. Now, the closest bus stop to us happened to be the Acropolis station. So we got there and immediately saw the ticket vendor, a pretty young lady with long curly hair cascading down her back. As soon as we approached her, another lady not so pretty, appeared by her side. That’s when katakata the grandfather of kasala burst! Both of them started to ‘market us’. The pretty one for the yellow bus the not so pretty one for red. The red bus lady was very loud and passionate but because her English was not very good, so we could barely make out what she was saying. On the other hand, the yellow bus lady would calmly and gently explain to us in very good English why we should ignore the red bus lady and buy from her. Telling us the red lady was from Peru and that she’s a stranger and as such not to be trusted! This would get the red lady even more worked up! She would tell us how wicked the yellow lady was and how she stole her customers from under her nose, that we shouldn’t listen to her, saying that they were both foreigners that the yellow bus lady herself wasn’t full Greek because her father was from Armenia. Intermittently they would face each other and rain insults on each other. It was like watching ‘the housewives of Atlanta’..Lol…..Seeing them both almost come to blows to sell us €10 bus tickets was simply hilarious! The name calling….the insults…OMG! LOL!
When we came back in the evening and they were still both at it. This time, trying to sell to a group of four Americans. Apparently these quarrels went on hour after hour every single day! I can’t imagine working under those conditions! Knowing you were coming to work every day to a battlefield! I wondered why one of them would not simply move to another station, but no, it had to be that station for them both! We eventually bought the yellow ticket (so did the Americans) but we found out later the red bus offered better value for money! But alas, if only the red bus lady from Peru would learn to speak English better………she would up her game.

Anyway, so here we were now touching down in Mykonos. It was 30.5c…yes, I checked! Lol. Actually the hotel shuttle bus that picked us up had it on the screen. It was a very impressive bus, very luxurious. I had my little notebook with me which I had ‘borrowed’ from my mum. So I could write down my experiences. I came prepared thanks to my dearest friend Hajara who had informed me a few days before that I would be required to write a blog on my visit to Santorini and Mykonos. Notice I said ‘informed’! I wasn’t asked…I was told! …wink wink. I had never written a blog and had no idea what I would write but I was determined to try! Here’s hoping I don’t bore you to death! So, where was I? I do get distracted very easily….hahaha.
Mykonos’ terrain is mostly rocky. On the small Aegean Air plane, coming in to land at the airport on a rock was somewhat nerve-racking. Though I was too excited to care! The houses in Mykonos were nothing I had ever seen before. They all looked like they were carved out of the mountain…they were all white in colour and all were built-in the shape of a cube with rounded edges. They reminded me of a cake. Strange but true. Very very pretty in a strange way. I found out later that this is the traditional architecture in some of the Greek Islands. Well in Mykonos and Santorini anyway.
So we arrived at the Myconian Ambassador Hotel to one of the warmest welcome I have ever gotten in a hotel . This hotel is truly beautiful. The staff are so warm and courteous, the food is delicious and the Thalasso Spa is simply out of this world. Just fabulous. I would recommend you stay here if you visit Mykonos. The hotel is owned by a family and they have about 7 hotels dotted around Mykonos. You can stay at any one of them but my personal favourites are the Myconian Ambassador and The Myconian Utopia. 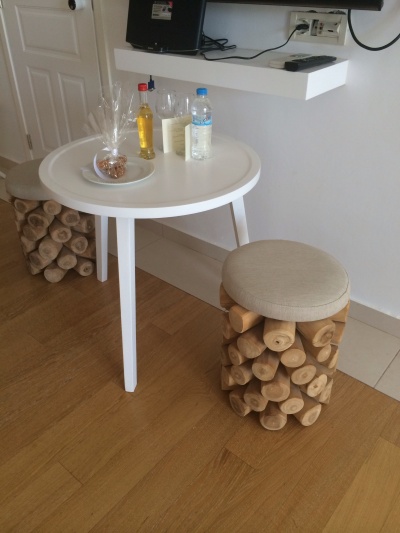 Mykonos is cosmopolitan and vivacious yet serene. It’s difficult to put these words together but that is what Mykonos is. It is as much a party destination as it is a quiet getaway. Mykonos is world-famous for its golden sandy beaches and transparent waters. There is a beach for every taste and mood. Over 20 beaches dotted around a dry, arid island covering an area of barely 90 square kilometres. Round the clock party people or families seeking a break, there is a beach for everyone. All these accentuated by the wonderful Mediterranean light and set against the deep blue background of the Aegean Sea. It’s population is about 11,000 with about 4,000 being foreigners. The island is basically shut down between the months of November and April and starts to come alive again from May to peak in July and August the summer months.

Mykonos is considered the Greek Saint Tropez and for good reason. It’s been one of the preferred destinations of the rich and famous for many years. Don’t be surprised if you run into Eva Longoria, Sarah Jessica Parker, Michael Douglas & Catherine Zeta Jones, Rihanna, Sofia Vergara etc. They are some of the American stars who favour Mykonos as a holiday destination.
There’s loads to see and do at Mykonos. On one of the nights we had dinner at the beautiful Remezzo (pronounced Remejo) restaurant in Mykonos town. On another night we had dinner at Koynelas Fish Tavern. Koynelas is a popular restaurant that offers traditional and authentic Greek cuisine. Open since 1967, many famous people have been patrons, including Jackie O. With a picture of Jackie O hanging on the wall, you know  that you’re in the right company. They have one of the best sea food selection I have ever had. The fish and other sea food are grilled on an open fire and you have to go straight to the kitchen and pick your meal (fish or other seafood). It is then weighed and handed over for cooking. Hmm, finger licking delicious! Lol.
The locals have managed to preserve the unique character Of Mykonos despite the influx of tourists year in year out. Numerous little churches and a multitude of colourful shops selling anything from local knick-knacks to designer goods litter the narrow whitewashed streets. One of the island’s famous landmarks is the Mykonos windmills. The main street is called Matoyani. Perpendicular to the central harbour, lined with shops, cafes and bars where you can take awesome photographs or watch the wonderful sunset. Our time in Mykonos was short but unforgettable. A place where a simple stroll along the narrow cobble stoned streets can lead to a breath-taking most exhilarating experience.

So we spent 2 days in spectacular Mykonos and boarded the Superjet (a high-speed passenger ferry) on day 3 at the Mykonos harbour headed for ‘Unexplored Santorini’…..the place where the word ‘beauty’ took on a new meaning for me. In my next blog, I will talk about Beautiful Santorini. God bless…

Join the conversation, I'd like to know what you think! Cancel reply