A WALK IN THE AEGEAN SEA… SENSATIONAL SANTORINI

Have you ever felt like you knew God? Have you felt a feeling so powerful you felt you were one with God… Like you are part of something so spectacular… Like you viewed the world through the eyes of its Creator……Have you ever seen beauty and it brought tears to your eyes? Did you even know that was possible? These and more were the feelings that coursed through my mind when I saw the famous Santorini sunset and experienced the power of His Majesty in live technicolour…. Often, we get lost in our daily routines and forget to appreciate the beauty of our earth….this earth with its shattering evil and the gentleness of its beauty…

Santorini was filled with tourists from all over the world; different cultures, different backgrounds, many who just wanted a great place to enjoy their vacation, not all of them or maybe even none of them felt like they were on a spiritual voyage or felt how I felt when I beheld the famous sunset over Santorini, yet none could deny the awesome beauty of that moment when the sun disappeared over the edge of the water. I had never experienced that in my life and my prayer is that I experience many more of such moments in my lifetime. It was such a deeply personal and profound moment for me that I didn’t even want to ‘share’ it with my companions at the time. 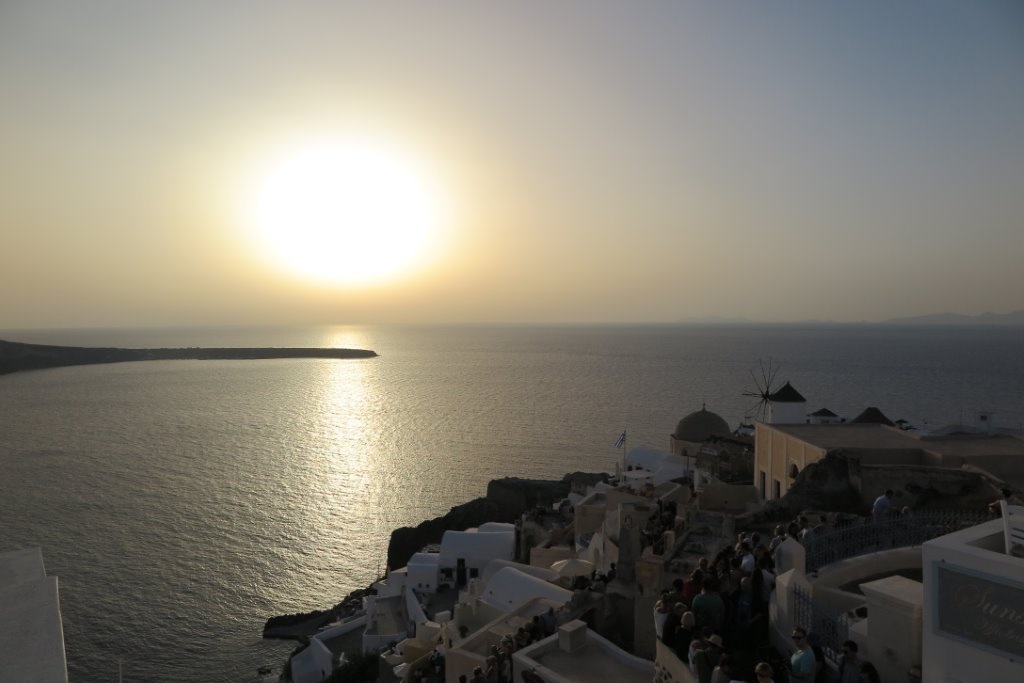 I am certain they had no idea how moved I was by that sunset. I was with my husband and two pretty ladies we had met a few hours earlier. Both are Americans but one of them is originally Nigerian. Imagine our surprise to meet our ‘sister’ in far away Santorini! Truly, Nigerians are everywhere! In the usual Naija way, we immediately ‘gummed’ her and started bonding like we had known each other forever! Thank God because Bola and Mel later proved to be life savers! On this trip I took so many amazing pictures in readiness for this blog post and can you believe it? Yours truly misplaced the camera??? Don’t ask me how. Long story. Suffice to say, Bola and Mel came to the rescue. The beautiful pictures you see of Mykonos and Santorini are through the lens of Miss Bola Elemo and Mel Cabada….thank you ladies for an awesome time in Santorini! Hugs.

Santorini is somewhat similar to Mykonos. In that it appears to be on the top of a mountain and the houses are cube shaped with round vaulted ceilings and mostly white in colour. Actually in Mykonos, they are all white but in Santorini they are peppered with pink, blue, yellow. We were told from 1968 to 1974 the government regulated the architecture and that is why the houses are all alike and mostly white. But now you are allowed to paint in other colours. Santorini is also a mixture of cosmopolitanism and serenity. However, that is where the similarities with Mykonos end. Santorini is the most picturesque place on earth. At least out of all the places I have been blessed to visit. 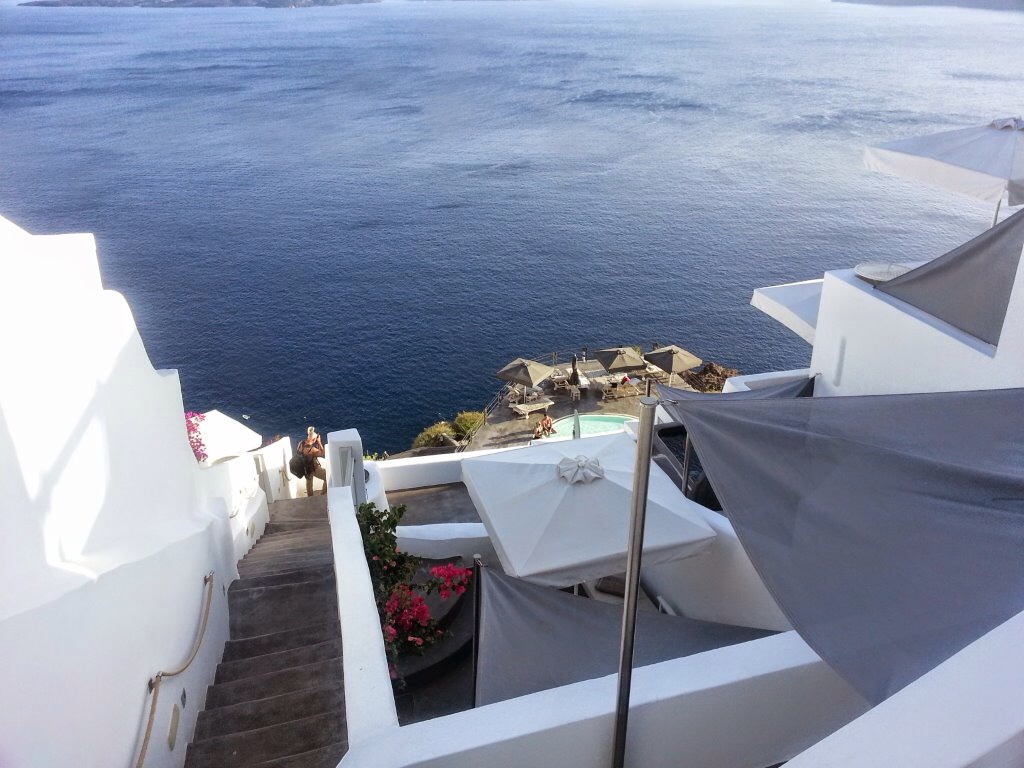 It has an unrivalled and unspoilt beauty. Did you know Santorini is still an active volcano? Santorini came about as the result of intensive volcanic activity. 12 huge eruptions so far… one in approximately every 20,000 years. Each one caused a collapse of the volcano’s central part creating a large crater known as the Caldera. 8 by 4 km in size with a depth of 400m below sea level. Our vivacious and strict tour guide, (she acted like the class teacher and we were her rambunctious set of students that she needed to keep a firm grip on!) told us the biggest volcanic eruption was 10,000 yrs ago and it caused a diameter 10km wide and a tsunami 200 meters high and went towards Turkey and Egypt which caused the 9 plagues in Egypt and only the 10th plague is of biblical origin!! I actually laughed out loud at the folly of men. Of course we know this isn’t true and the Bible is the true word of God. The bible says there were 10 plagues and that is the undisputable truth. Anyway, the last volcanic activity was in 1950 so fear not!

The bus ride up from the harbour to the town is like climbing the face of a rock, only this time, you’re in a bus. The road is carved out of the sides of the mountain, winding up the hill with its scary twists and turns, leading to  Fira, the picturesque capital of the island, perched high up on the edge of the Caldera with views like a marvellous painting and where you have the famous sunset Santorini is known for. 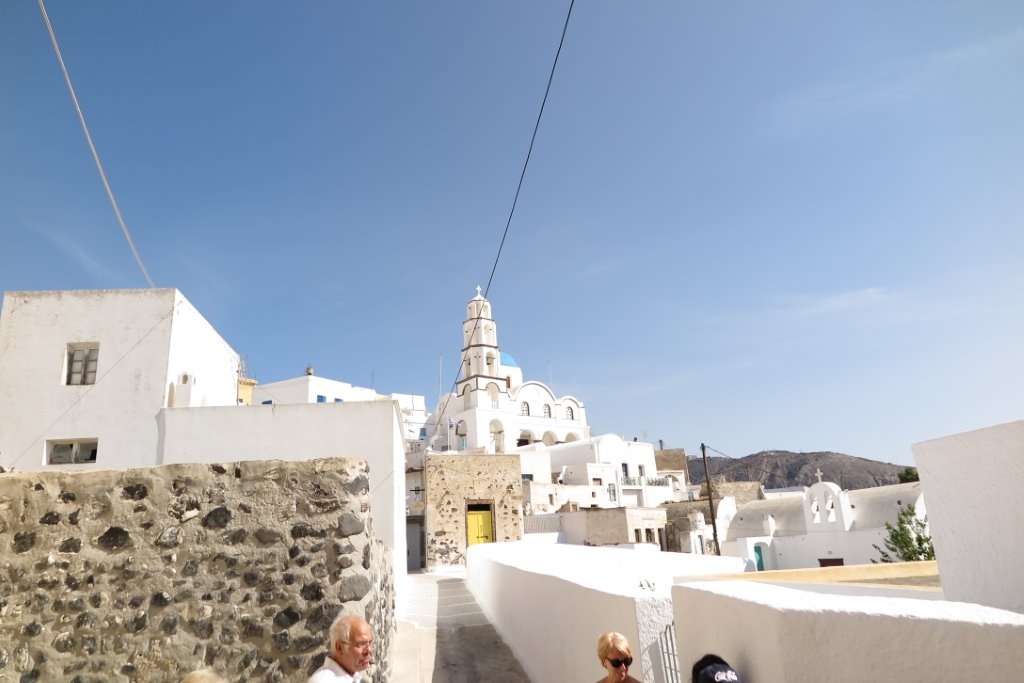 Santorini is best for a romantic getaway with its exquisitely clear waters and breathtaking views. It’s also a popular wedding destination. The nightlife is not as active as that of Mykonos (unless you count long romantic walks along the beach or exchanging kisses beneath the island’s famous sunset). However, what Santorini lacks in nightlife, it more than makes up for with its spectacular rock formations and impressive landscapes. *Whisper* Angelina Jolie has a home here…

In Santorini there are 353 churches within 735sq mtrs of land space, more than in Rome. Back in the day, almost every family in Santorini built a church. Notice how the Greek cross is different from other crosses? It’s on the blue and white flag of Greece. The vertical and horizontal lines cross at the exact middle while the other crosses have the vertical line place much higher on the horizontal line.

I encourage you to visit beautiful Santorini…be sure to visit the volcanic sites, make sure to try the local cuisine made with cherry tomatoes, white egg plants and capers….the pistachio brought from all over the Mediterranean. Did you know pistachios need to be planted near the sea because they need the salt air to grow? Visit the island’s famous wineries some of them operate as museums as well. Watch a movie in the open air cinema….it’s an experience in itself. Santorini is truly the pearl of the Aegean!

P.S- A note from Hajara

People! See why I love Ola? You can absolutely tell a lot about a person by how they write. She was right, I informed her- “if you travel to Greece and go to Santorini where I have not been, you must write a guest blog on my blog”. She didn’t write one, she wrote two. She took notes, took loads of pictures, then lost her camera. Still she found a way to get us great pictures. Totally indulging me, she had given her word and she delivered, regardless! When I sat with her to choose what photos to use, Ola kept saying “use this photo, use this one, let them enjoy it!” Ola’s spirit is so so generous! Thank you Ola for writing on my blog. I am honored that you debuted here, because like I have told you, you have “writing” in you. Write Ola! You owe it to God and humanity to use ALLLLLLLLLL of your gifts. Love you loads.

Stay awesome everyone and thanks for stopping by-Hajel!

Join the conversation, I'd like to know what you think! Cancel reply